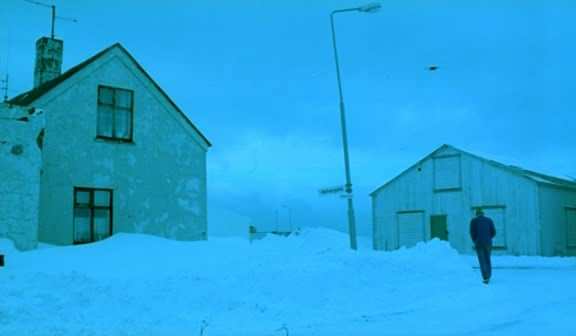 Dagur Kári’s first full lenght film, and at the same time his directorial breakthrough, Nói the Albino (2003) is often regarded as a big internationall success of Icelandic cinema at the beginning of the 21st century (Nordfjörd, 2010:7). Listed as one of the best Icelandic movies ever (Lutton 2016) it both creates and reflects common idea of Icelandic landscape and its inhabitants, being a good example of ‘Icelandicness’. Yet the story of a teen weirdo dreaming of breaking free from the claustrophobic place of his birth can be seen as universal and appreciated by foreigh audiencies unfamiliar with the typical Icelandic conditions of living.

A 17-year-old Nói (Tómas Lemarquis) lives with his grandmother (Anna Friðriksdóttir) and is sometimes visited by his father (Þröstur Leó Gunnarsson). As an exeptionally recalcitrant student, Tómas hardly ever appears in the school, prefering to spend time with his older friend, owner of a local bookstore (Hjalti Rögnvaldsson) or to hide away in a basement den in his house. His melancholic and relatively meaningless life is interrupted by the fact of meeting Íris (Elín Hansdóttir), a girl working in a gas station. The protagonists live in a remote village somewhere in the West Fjords of Iceland, having their everyday routines and occupations, but seemingly fullfiled with melancholic and hopelessness. Nói and Íris decide to run away to Hawaii, but when Nói steals a car and asks his girlfriend to join him, she refuses. The main character becomes arrested for the theft and, when having returned to his house, he goes to his den. There he experiences an avalanche, that kills all the other characters. In the final scene Nói goes to the ruins of the house, takes his View-Master and watches a photo of an exotic beach with palms, a symbol of his unfullfilled dream.

I chose the culminating scene of the avalanche, because it appears as the most relevant one and a turning point of the story. Luckilly, the scene was described as “key” by Björn Nordfjörd (2010:71) and it was also analised in details in his book Dagur Kári’s “Nói the Albino” (2010:96-98). Despite his meticulous examination of the scene, with special focus on editing and camerawork, I decided to extend the analysis to other stylistic devices and my own interpretation of the passage. Yet, I wanted to take advantage of cinematic  terminology used by Nordfjörd.

The sequence starts with a view on Nói’s house, with a stately mountain in the background. The simple building of corrugated metal with cement underpinning, typical for Icelandic architecture, is shown „from a low and slightly unbalance angle” (Nordfjörd 2010:96) in a worm’s eye view, making the Bolafjall mountaing bigger than it really is. The winter mise-en-scène is filled up with cold colour pallete (a blue hue that appears in every other outdoor scene, giving a feeling of eternal freeze and twilight of Icelandic winters); probably created by a blue filter. The sound, similar to an engine wirring, is presumably non-diegetic, but can be also made by Kiddi’s car who drove his son back to the house.

Next scene presents Nói opening the hatch and going down to his basement den. It is a medium shot, with natural, but yet blue-like light inside the house. The sound consists of opening and closing the hatch, with a background subtle wailing that continues to the next shot and stops immidiately in 1:16:56. Another medium shot shows Nói sitting in a badly-lit basement filled with simple objects: a bed, a wooden shelf with small objects, a fan. The protagonist lights up a cigarette, making additional sound and lightning. His neutral costume, a pale-blue T-shirt and light jeans, fits the ‘cold’ millieu of the scene and the rest of the movie.

While Nói is smoking his cigarette, a cut takes us to a blue-lit living room, where the grandmother is working on her jigsaw. The sound of putting the elements together is interwoven with silent shaking and the quick cut takes us to Kiddi’s dining room, also cool-lit by a window with a view on the mountain. Kiddi stops eating and starts listening to the increasing sound of shaking. Then we get back to the grandmother, who – shown in a medium close-up – raises her head and listens to the sound. The sound continues and another cut shows Þórarinn (Þorsteinn Gunnarsson), the headmaster of Nói’s school, who is being interupted by the sound while playing with a Rubic’s cube. Another medium long shot shows  Íris reading a newspaper and facing to an invisible target, presumably a window. Next cut takes us back to Nói’s den and shows him sitting on the bed and listening to the sound in surprise. In the same medium shot, the basement starts shaking and things are falling down from the shelves.

After that comes complete darkness, which lasts for 22 seconds, accompanied with ‘dead silence’ (Nordfjörd 2010:99) that changes into a slight buzz. Then the darkenss and silence are both cut off by a lighter in Nói’s hands. The only light of the fire reveals the protagonist in a medium shot. As Nordfjörd notices, next scenes seem to be a single one, but they are divided by „the cuts hidden” (2010:97). We see as following: a close-up of Nói’s face heading to the hatch; a medium shot with him presented from the back, trying to push the hatch; a medium close-up in which Nói is knocking the hatch and then returning to his bed; plying with the lighter, the only source of light in those scenes Nói is shown in an extreme close-up, the focus of the camera is on the lighter and his blurred face in the background; next cut shows him „in a close-up from an extremely low angle” (Nordfjörd 2010:97), shouting „Hallo” thrice; last shot shows his face again in extreme close-up with the camera frist focusing on his forehead and then blurring the view (the light of the lighter pulses, giving warmth to the scene, then the screen goes black again).

In the darkness, a slight sound of scratching can be heard, dogs starts barking and we hear the sound of opening the hatch. Camera shows a rescure worker from the worm’s perpective and, with a quick cut, a figure of Nói lying on the bed, shown from another angle than the rescuer would probably see him (Nordfjörd 2010:98) and lit partially by the outside light. He rises up and next shot shows the rescuer from Nói’s perpective, who is calling his colleagues and enters the basement. Then we see him helping the protagonist to get out and another shot with two rescuers putting a blanket on Nói panting from the cold. His pale-blue T-shirt contrasts with orange uniforms of the rescue workers, as to emphasise the difference of temperature. The light is dim but yet stray, produced by lamps in the middle of the night. Next medium long shot shows rescuers warming Nói and next one, an overall long one, depicts other rescuers working in the house’s ruins, lit partially by the lamps. The final shot is a vista on the street with barely-lit houses in the night with a fire enging coming from the right corner and some rescuers crossing the street. The sound in both scenes is diegetic, with their voices and engine’s whirr.

In general conclusion, the ‘tour de fource’, so the avalanche itself, is not depicted even once in the movie. However, Nordfjörd gives several examples of foreshadowings of the catastrophe,, such as a local medium’s prophecy about death or scenes of Nói working as a gravedigger (2010:93). While I agree with Nordfjörd that the opening scene with Nói cleaning the doorway completely blocked with snow is a good ‘ouverture’ to the final tragedy, I am sceptical about other prefigurations of it (splashing blood, Kierkegaard’s philosophy). In my opinion the only direct foreshadowings of the avalanche are the repeating views on a mountain and a scene of Nói shoting to its icicles. Still, the sequence of twenty-five shots, kept in bad lightning and diegetic sound, can have a stronger impact on a viewer than showing an actual avalanche destroying the village.

As stated in the first paragraph, Nói the Albino is a very Icelandic movie. Not only it presents the mise-en-scène characteristic for this remote island in the north but also focuses on a natural phenomenon of the region, especially the West Fjords represented by the mounting in a town of Bolungarvik chosen for the scenography. This sparsely populated part of Iceland has experienced many avalanches, of which two that happened in 1995, in Súðavík and Flateyri (Nordfjörd, 2010:71) are still vivid in Icelanders’ collective memory and therefore the local reception of the movie could be different from the international one (idem, 2010:74). As shown in another Icelandic movie, Cold Light by Hilmar Oddsson (2004), avalanches make Icelanders to live in ‘a state of emergency’. Still, the movie can be regarded as ‘Scandinavian’ for, as indicated by Nordfjörd, it features both ‘Nordic melancholia’ and ‘dark Scandinavian sense of humour’ ( 2010:22-23). The motif of humility towards powerful nature, also avalanches, is present in Scandinavian cinema (shown in Ruben Östlund’s Force Majeure, 2014), likewise the stylistic devises typical for ‘Nordic noir’ can place Nói the Albino among good cinematic representations of Scandinavian culture.

2 Replies to “Analysis of Dagur Kári’s “Nói the Albino””