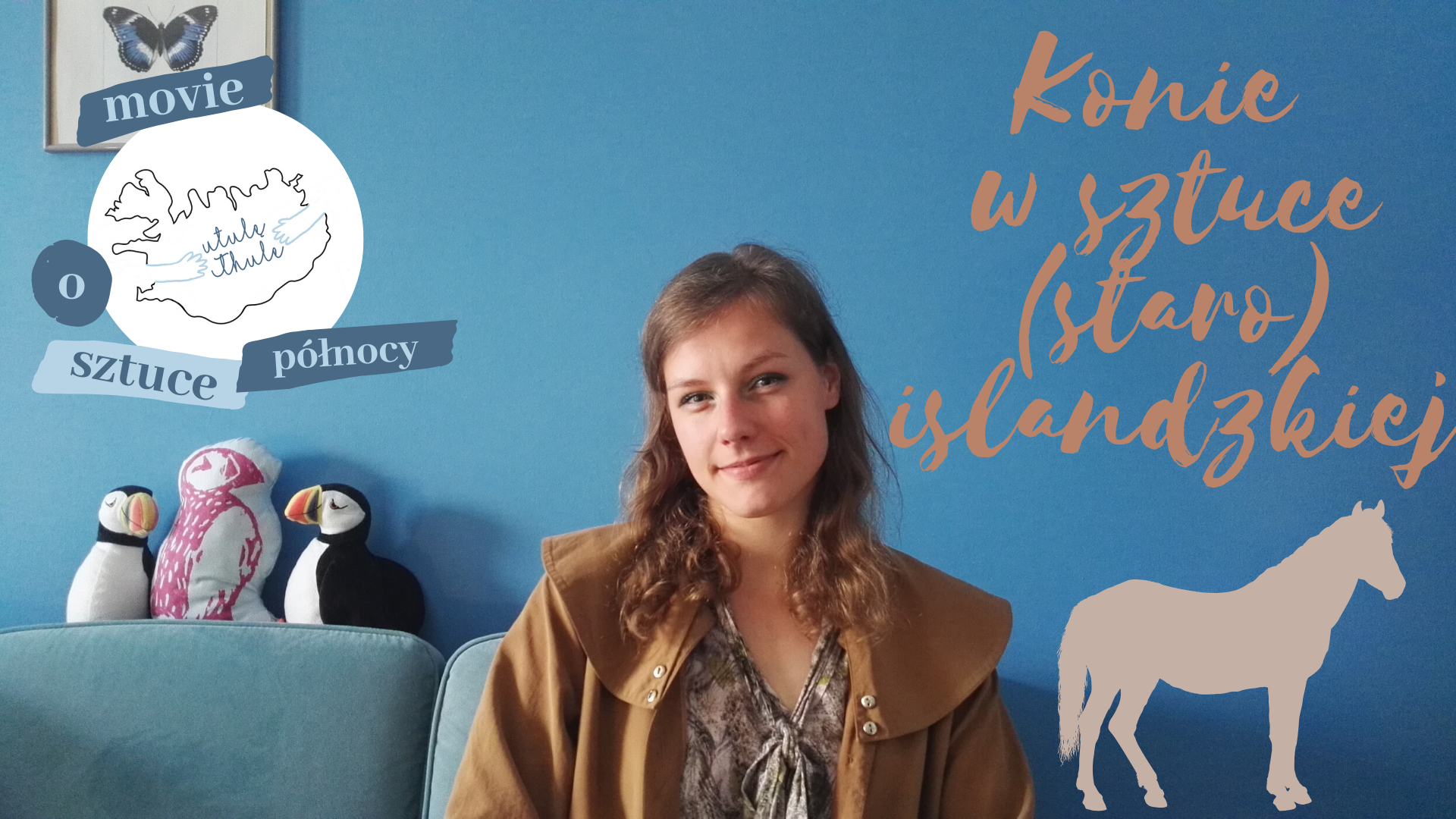 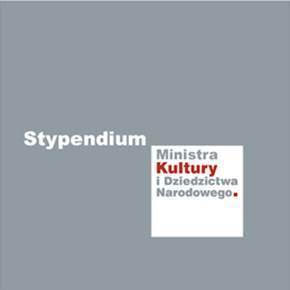 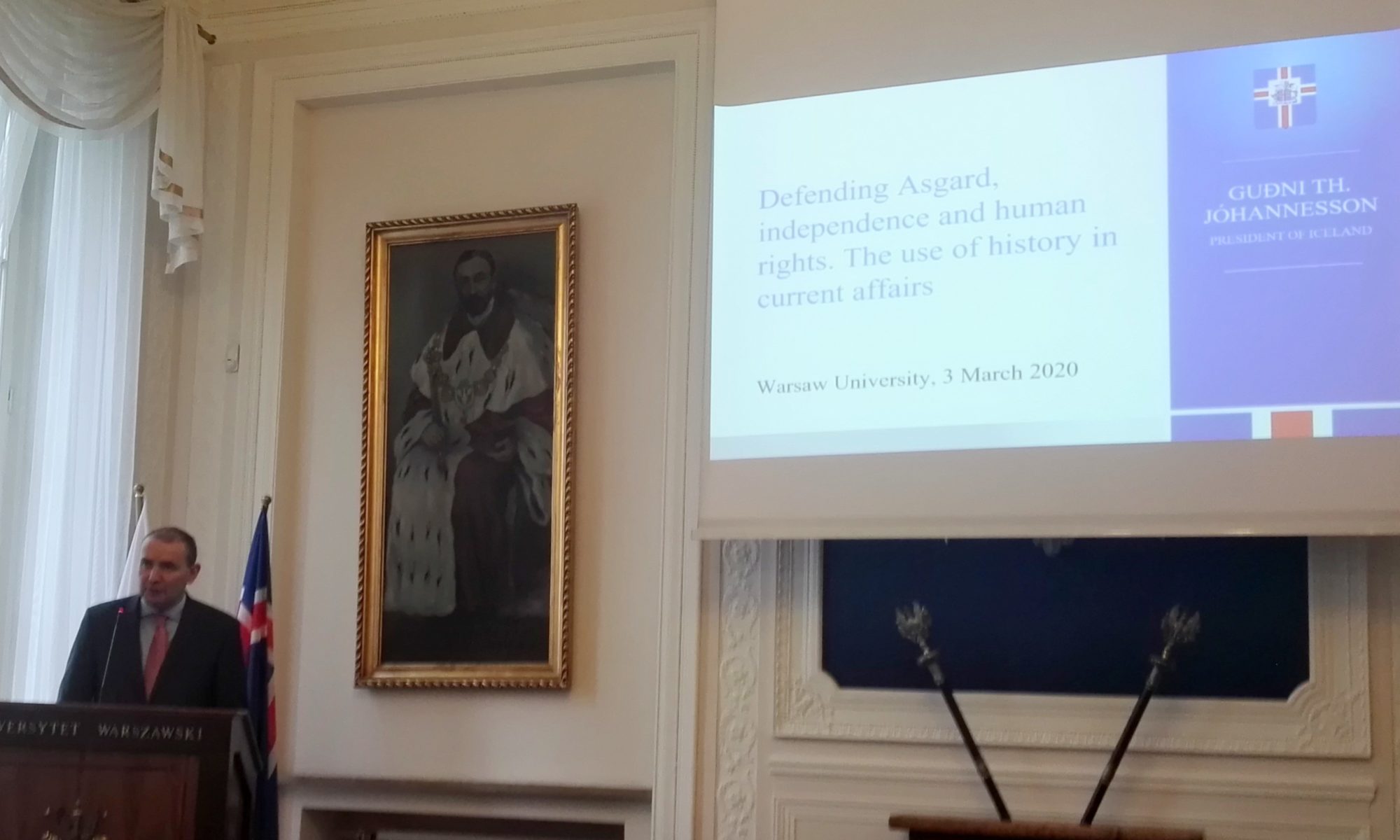 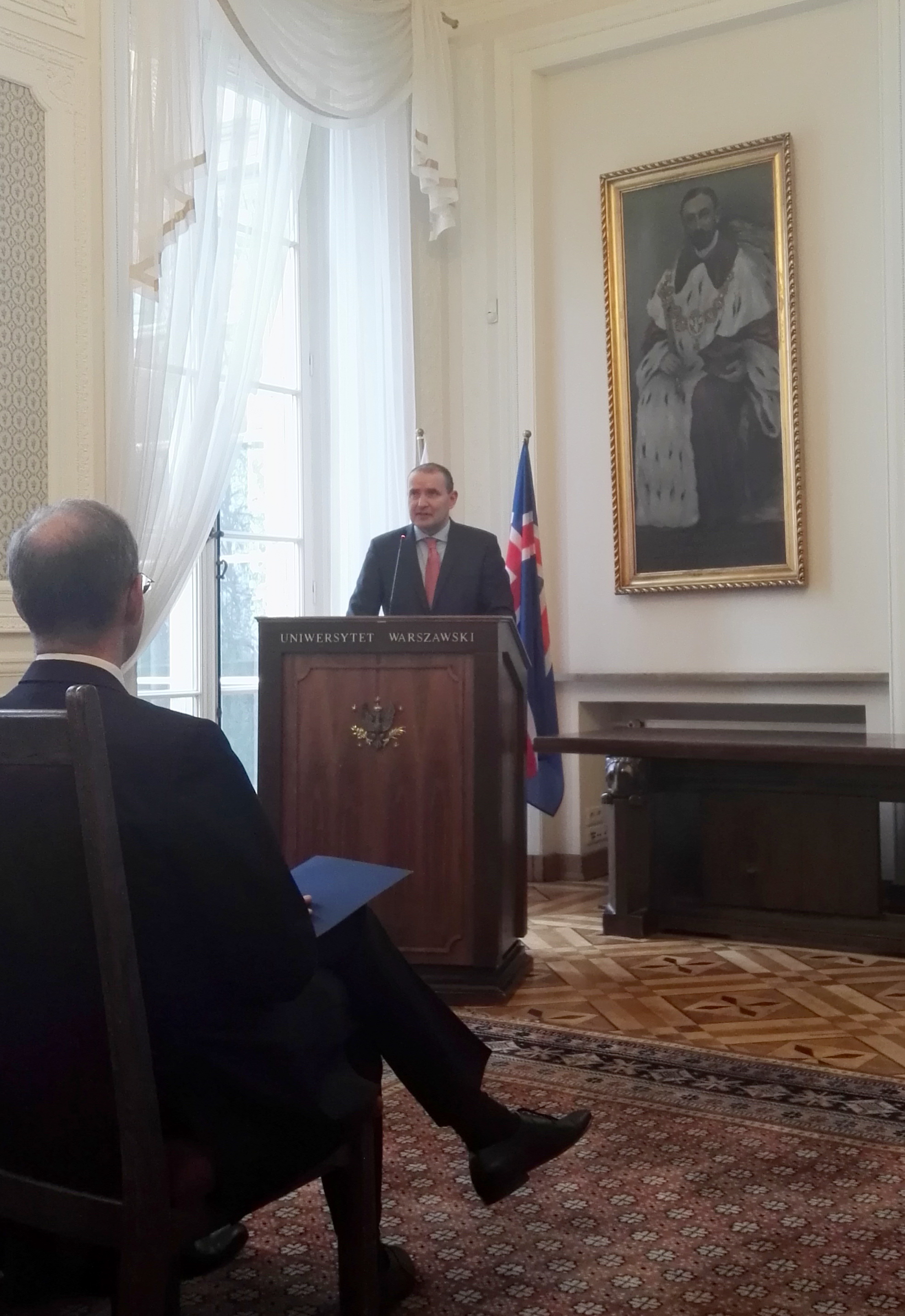 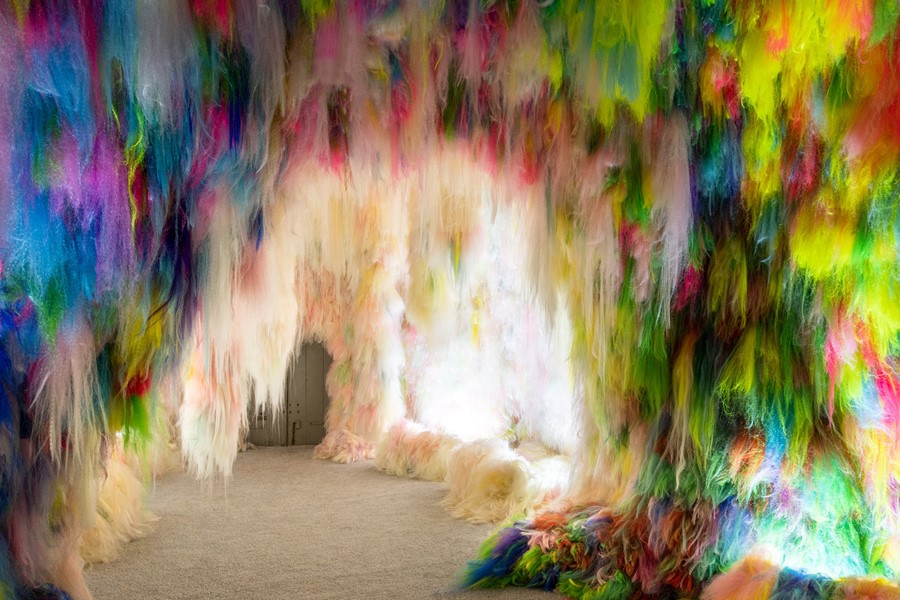 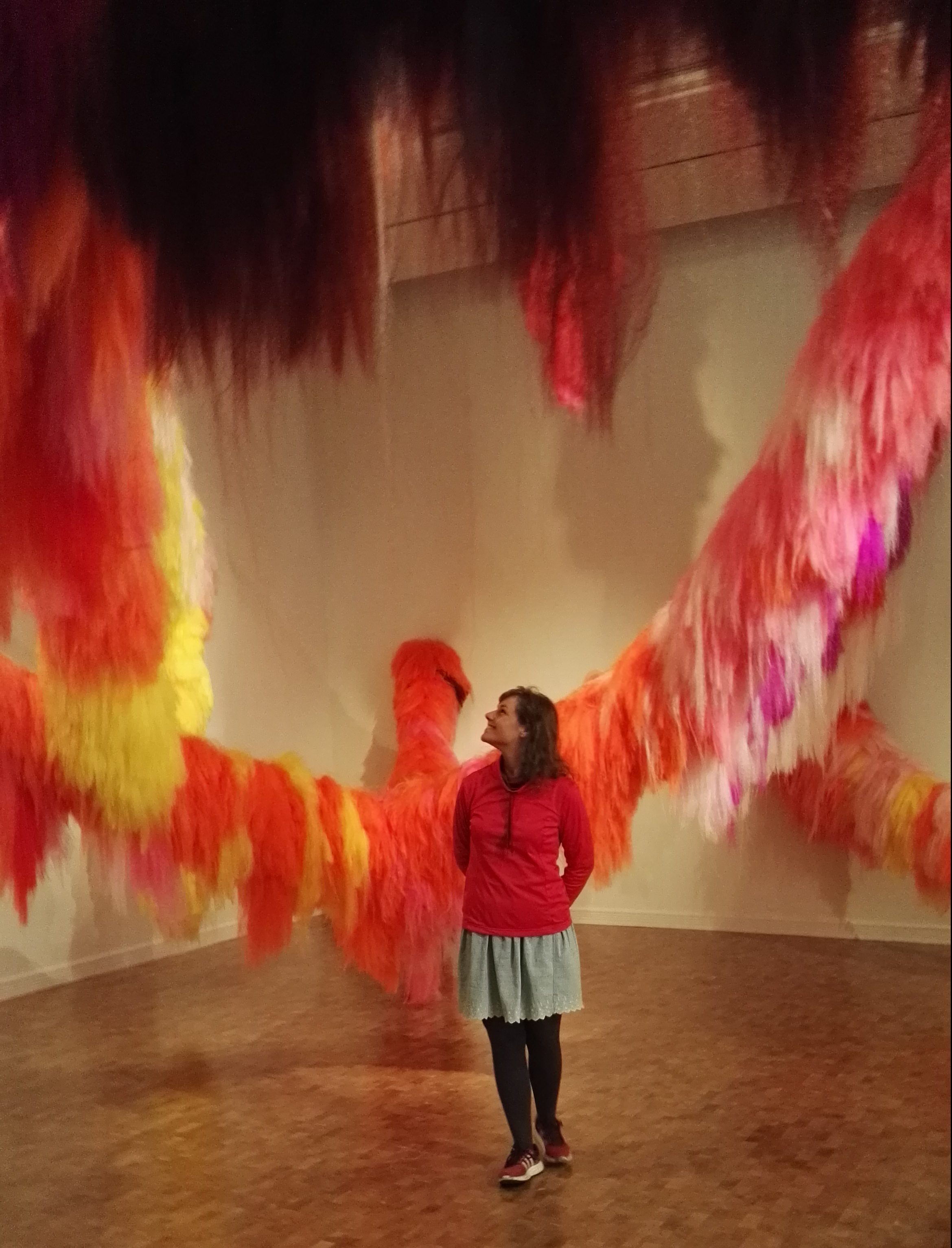 Cóż, May You Live in Interesting Times. 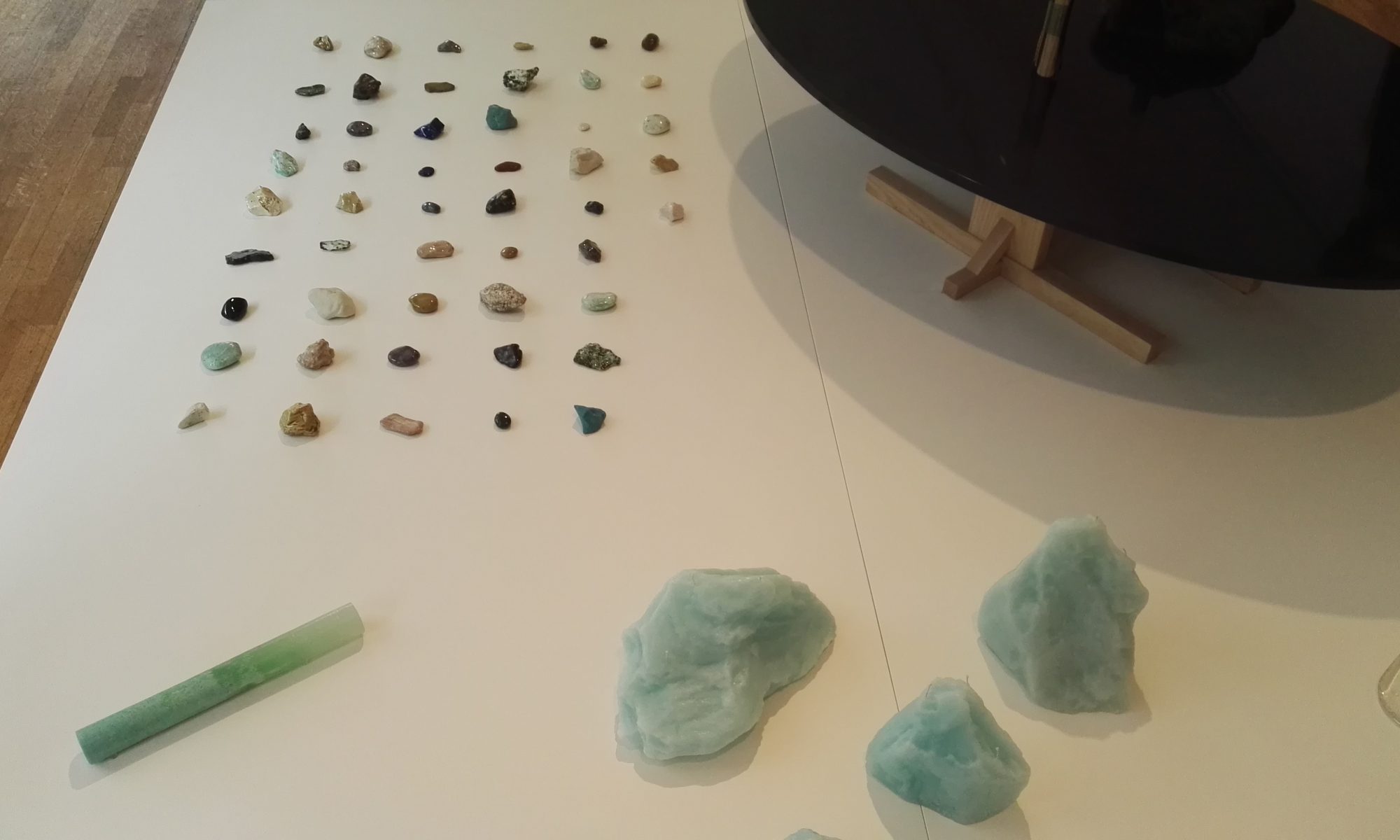 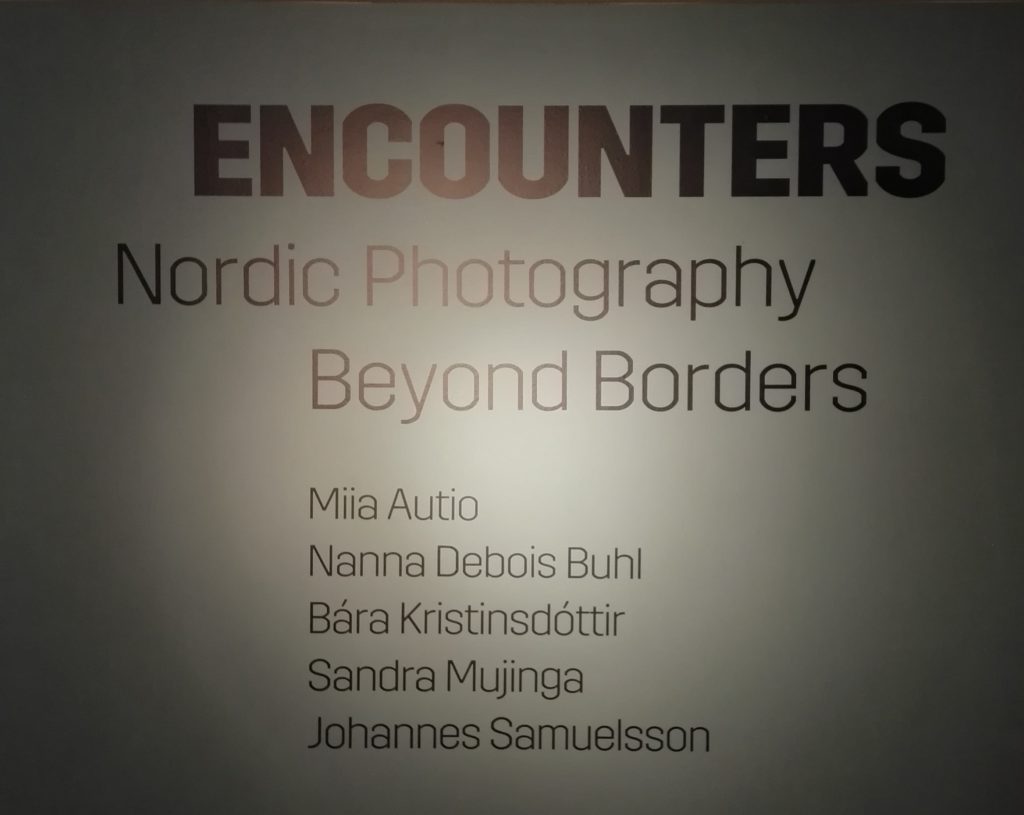 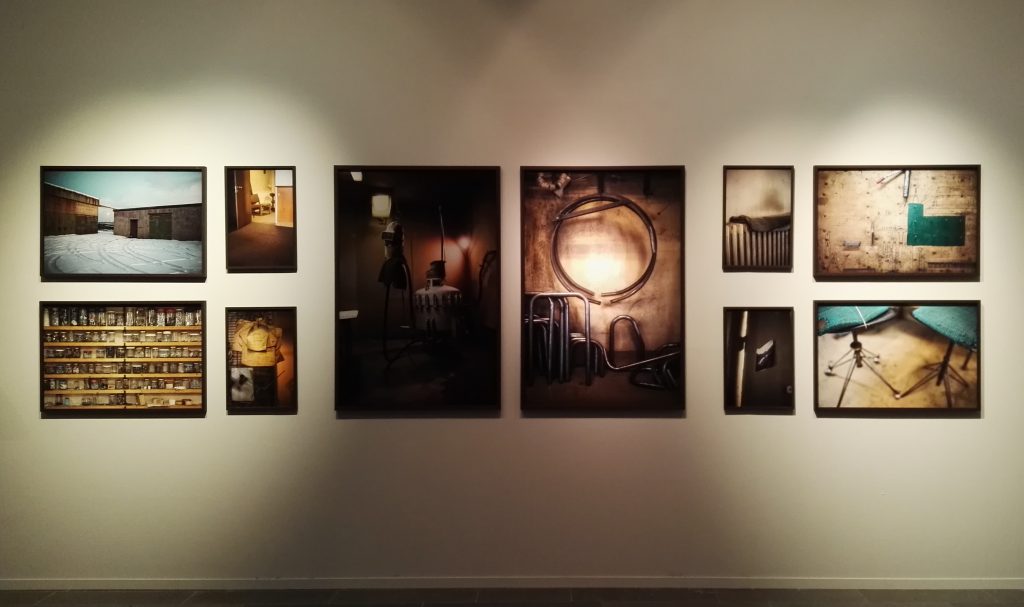 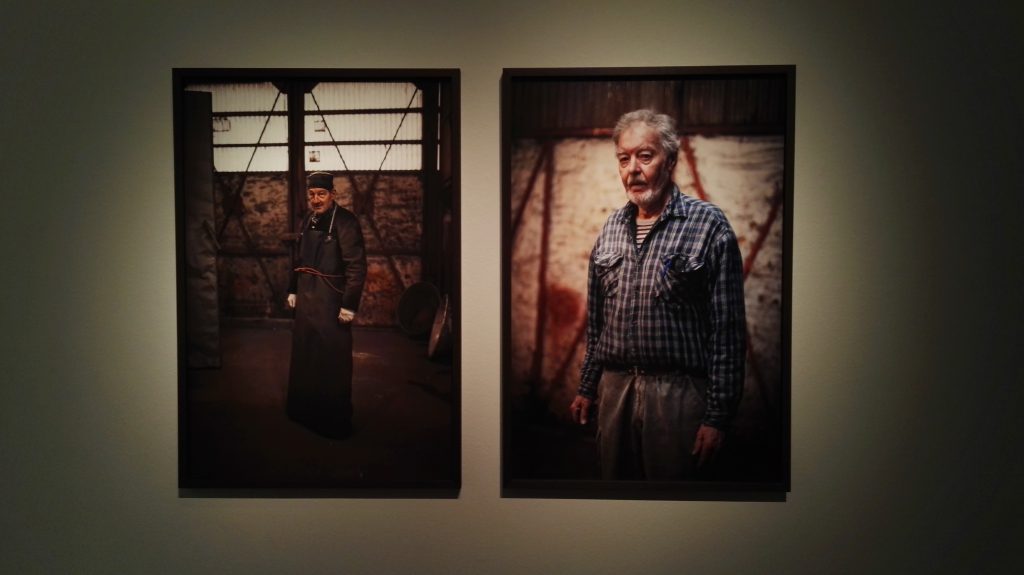 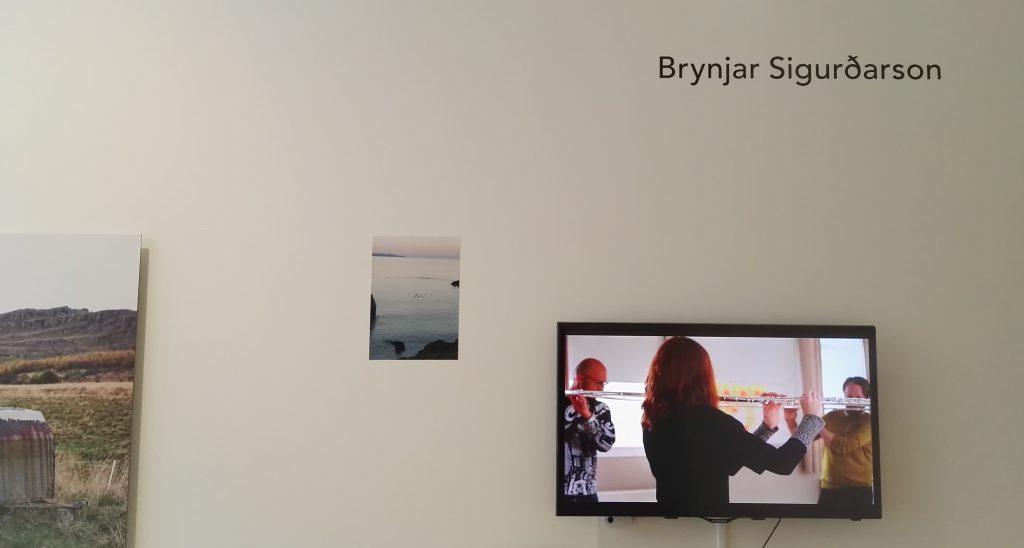 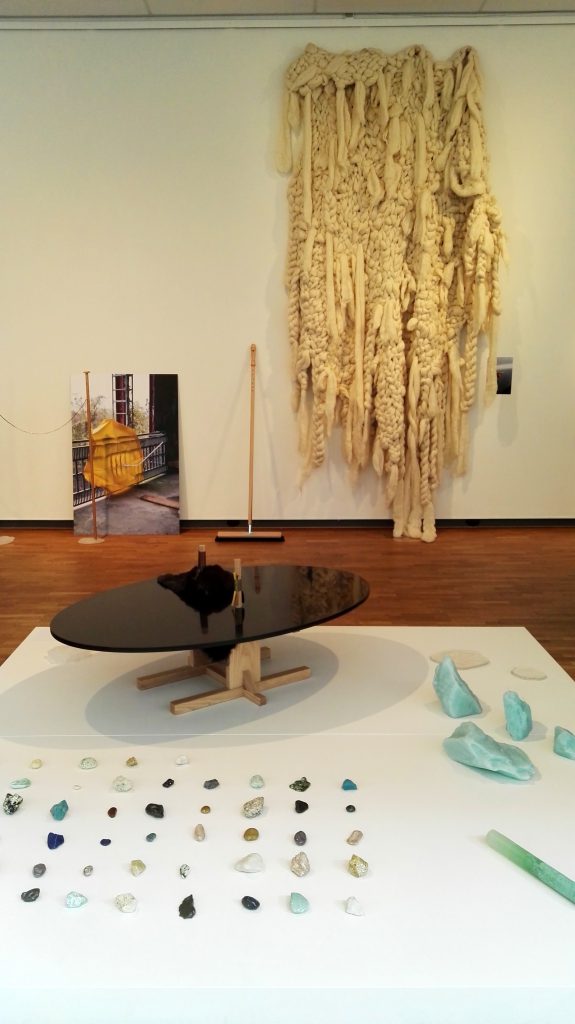 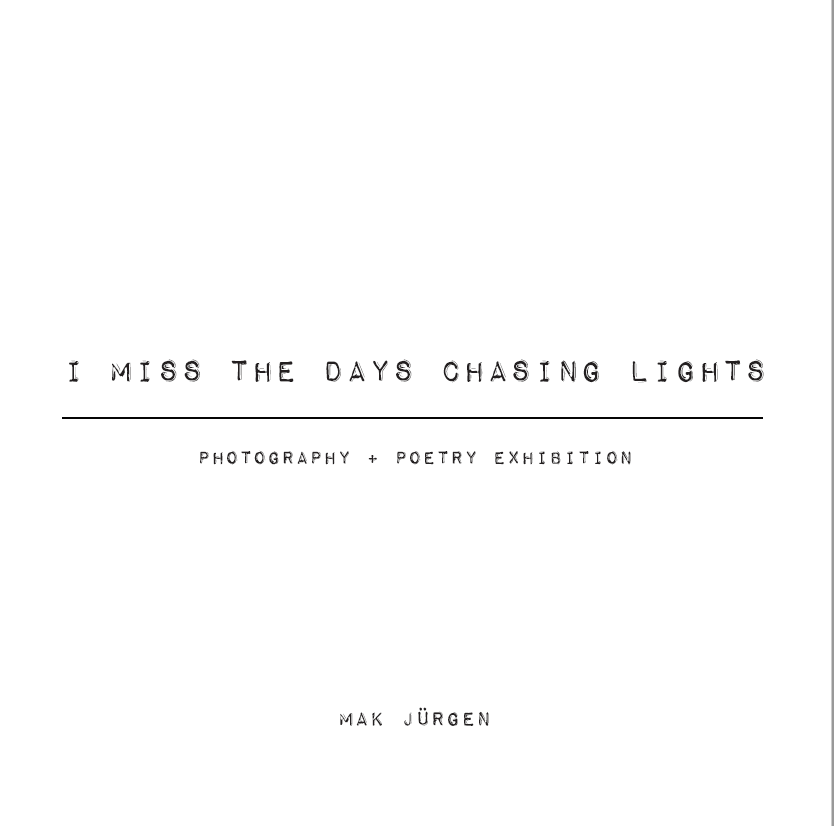 Nowadays the Nordic region is often being imagined and aesthetically associated with the Vikings and their heritage. Some of the Scandinavian countries, like Iceland, has recently started to profit by presenting itself commercially as a ‘truly’ Viking place. As a matter of fact, this process of building national identity on the Vikings’ origins burgeoned in the 19th century, when especially Sweden, Denmark and Norway wanted to constitute their participation in heroic events of the Vikings Age (Varnedoe 1982:13). Though not always certain if produced by the Vikings or extant in its original form, art from around 8th-11th centuries has become a crucial inspiration for artists of following periods, thus can be regarded as a foundation of ‘Scandinavian ​​aesthetics’. 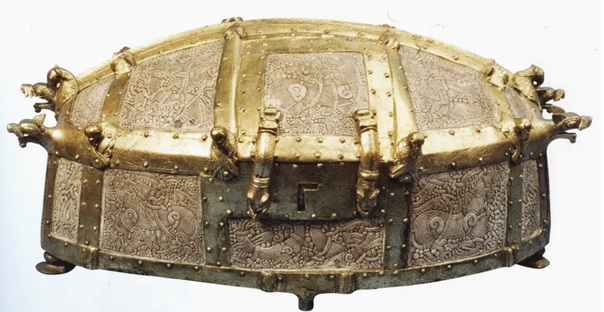 Characteristics of the Viking art consist of typical ornaments divided into six different styles, classified in the 20th century. Typical for artworks from around 970-1050 and chronologically fourth, the Mammen Style is best represented in the so-called Mammen Masterpieces (Graham-Campbell 2013:111), including the Cammin Casket (il 1). Nowadays known only from copies, as it was destroyed or lost during the Second World War, it was a bowed-side casket made from wood overlain with twenty-two sheets of elk antler (Roesdahl 2010:151) and guilt with copper or gold. According to existing casts and pictures*, the metal parts of the frame were decorated with heads of different beasts (such as birds or wolves), whereas the carved antler depicted elements typical for the Mammen style: ‘Great Beasts’ with four legs and human-like masks (Roesdahl 2010:151) as well as foliate and interlace ornaments​​(Graham-Campbell, ​​2013:112-113).

The 69-centimeters-long casket with six short legs was house-shaped (Roesdahl 2010:151) or even, as James Graham-Campbell suggests, formed like a tenth-century Viking Age hall (2013:111), which makes it distinct from other ‘Mammen Masterpieces’: the Bamberg casket and the León Reliquary (ibidem). That is why it is difficult to say whether they were all three executed by one master, not to mention that the Cammin casket was “more elaborate in its wider range of designs” (Graham-Campbell 2013:114).

Still, regarding the rich ornamentation and sophisticated technique, the casket must have been produced in Scandinavia and by one of the Vikings masters. Moreover, it was not only inspired by the form of timber halls constructed under Harald Bluetooth (Graham-Campbell 2013:112), but also bore traits typical for subsequent stave churches: hog-backed roof-line and beasts’ head on the ends of the ‘roof’ (Graham-Campbell 2013:112-113). However, both Graham-Campbell and Else Roesdahl agree that the iconography of the carving has nothing to do with Christian themes (Graham-Campbell 2013:114; Roesdahl 2010:151), which can be regarded as another argument for a master deeply rooted in​​the​​Vikings ​​traditions ​​(even​​ though​​ Scandinavia ​​knew​​Christianity​​ at​​ that​​ time). 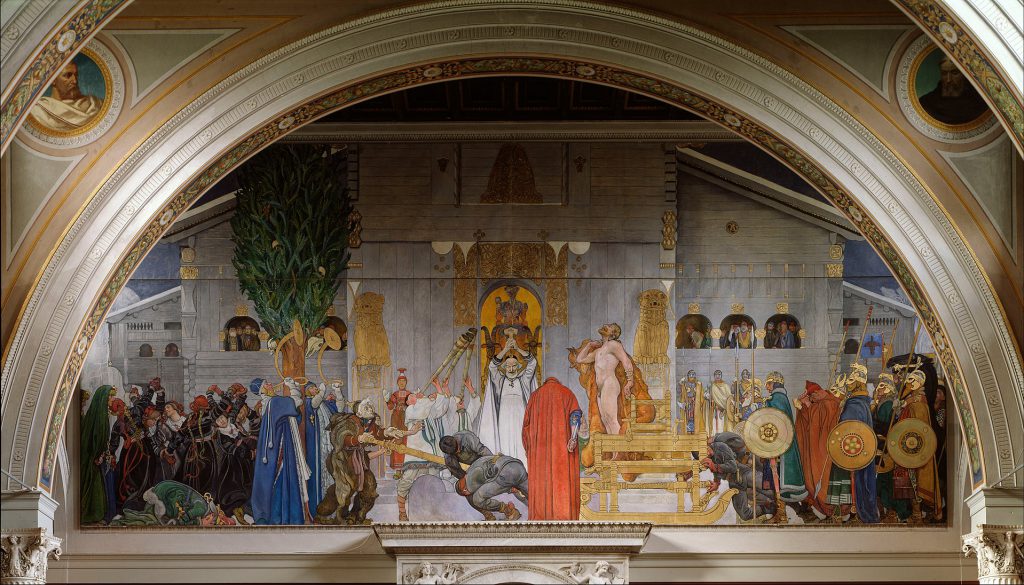 As stated earlier, the Viking Age was an important source of inspirations to artists in the 19th and early 20th century, especially when it comes to the ‘National Romanticism’ and construction of national identity ​via art (Facos 1998:117). A Swedish painter Carl Larsson (1853-1919) was clearly inspired by the Vikings, painting his ​Midwinter’s Sacrifice ​(il. 2) ​for decoration of the staircase in the National Museum in Stockholm**. As a subject for the never realised mural painting, he chose a ritual sacrifice of a Sweden’s legendary king, Domalde, of which he read in Snorri Sturluson’s 13th-century ​Heimskringla chronicles. But beyond the fact that the theme was of questionable credibility and broadly discussed in Sweden, what is most noteworthy in the Larsson’s composition is the design of the temple in the background, for it shows both the artist’s interest in the Viking art and how it was ‘transformed’​​ by​​ the​​ 19th-century​​ imagination.

The temple depicted by Carl Larsson is the one in Old Uppsala, the central worship place in the past Scandinavia. According to writings by Adam of Bremen, it was “​built entirely of gold” (​Cavalli-Björkman 2007:15) with three figures by the entrance, depicting the Norse gods: Thor, Odin and Freyr. As the famous temple does not exist anymore, Larsson tried to reconstruct it in his painting; the first sketch from 1911 bears a caption “Uppsala Tempel” and shows the effect of his research in the National Museum in Copenhagen. However, his attempt was harshly criticised in press by an anonymous “Arkeolog” who claimed that Larsson mixed different styles and used motifs that were impossible to occur in Viking art (Isaksson 1983:37). Still, some parts of the architecture recall stave churches: wooden structure, beasts’ head terminals on the roof, a general form of the building, not to mention gilded ornaments below the niche. Though the whole image of the temple is not historically correct, it shows how the general idea of the Viking art influenced the artist’s work, as it seems that the visual attractiveness of objects seen in museums in Copenhagen (including fibulas used as inspiration for the Thor’s hammer, held by the priest in the middle of the composition) was more important than giving a decent and credible picture of the Viking​​Age.

Consequently, Larsson’s latest monumental composition can be considered in terms of ‘Scandinavian aesthetics’. Both form and contents of the painting, executed on the height of Swedish ‘Romantic Nationalism’, confirm how important the Viking’s heritage was in constructing the national identity. Carl Larsson got influenced by those ideas to that extent that he even suggested building a Swedish Pantheon in Old Uppsala, as the place with Swedish king’s tumulus is the most important for the whole Swedish nation (Larsson 1908:37). Description and drawings included in the article for “Ord och Bild” show that, despite the name, Swedish Pantheon was supposed to be a reconstruction of the Vikings’ temple rather than a neoclassical buildings popular in Europe at that time***. Therefore, ​Midwinter’s Sacrifice​, with its nationalistic message and an interesting history of reception****, is a good example of Swedish, if not Scandinavian, art, not only in terms of aesthetics but also concerning the​​ importance ​​of​​ Vikings’​​ roots ​​in ​​Scandinavia.

If not in painting, the Viking architecture also had impact on buildings designed and erected in the ‘National Romantic’ period; one of the best examples is the church in Kiruna, built between 1909-12 by a Swedish architect Gustaf Wickman (1858-1916). The form of a stave church, though transformed through modernism, remained a major inspiration for contemporary architects, especially in Iceland. Icelandic modern architecture of the 20th century was basically made in concrete, representing “an eclectic combination of architectural styles, including classical, traditional Romanesque-inspired Icelandic and Functionalism” (Kent 2000:66). Local architects, such as Guðjón Samúelsson (1887-1950) or Sigurður Guðmundsson (1885-1958), both turning to the traditional Icelandic architecture elements in their late projects (Kent​​2000:326),​​ influenced​​ on​​designs​​ of​​ the ​​following​​ generation ​​of​​ architects.

Hákon Hertervigs’ Church in Ólafsvík (il. 3) can be considered as an example of a contemporary variation on the stave churches. Triangular forms of the walls and the slanted roof (Howarth 2016) with the overall construction divided into volumes of different sizes joined together show similarities to the Viking architecture (Stokstad & Cothren 2013: 443). Though built of concrete, the church seems to imitate the stave structure with the matching bell tower as a dominant element of the core. The interior of the church, especially the wooden ceiling recalling the Viking Age halls, also based on triangles, is rather small and gives the sense of ‘cosiness’ of the stave churches. Altogether, the Hertervigs’ project from the 1960’s shows an interesting combination of traditional elements of the Viking Age as well as functional and modern solutions; the compactness of forms, with the crucial role of light in the interior, as well as whiteness of the walls and a practical function of the slanted roof are also found in other Scandinavian buildings of the epoche, and can be regarded as typical traits of the Northern architecture, if not ‘Scandinavian aesthetics’ in general.

In conclusion, two examples of Scandinavian art of the 20th century show the importance of the Viking heritage in creating ‘Scandinavian aesthetics’, especially in the period of constructing national identity (turn of the 19th and 20th century) as well as re-finding the nation’s origins in later years*****. The motif of Viking architecture, having its early representation in the Cammin Casket, yet mostly associated with the later stave churches, has been used as a major inspiration for Scandinavian artists. Paintings depicting themes of the Viking Age, based on archeological discoveries, yet not always historically correct, and modern or contemporary architecture inspired by the extant examples of stave churches, still transformed by new ideas and practical solutions, represent the aesthetics having origins in the Viking Age but having also been re-established in the following epochs. As a matter of fact, the present-day image of the Vikings, being associated with the Scandinavians all over the world, is a product of both the 20th century art and of tourist trade in the 21st century. In other words, ‘Scandinavian aesthetics’ have been created not only by artists, but also by souvenirs’ producers and travel offices, trying to sell the ‘Vikingness’​​ of​​ Scandinavia.

* Until the 20th century it was known as a reliquary of St Cordula and kept in the cathedral of Kamień Pomorski, where it presumably ended up as a gift of the Viking chieftains to Polish princes or as an imported goods (as a nearby settlement of Wolin was an important place on the Vikings trade way), vide:​​Graham-Campbell,​​2013:112, ​​Roesdahl​​ 2010:152.

** Having decorated the walls with scenes from the 17th-century and 18th-century Swedish art history, as well as the motif of ​Gustav Vasa entering Stockholm in 1523 ​in years 1895-1907 (vide: Facos 1998:170-175), Larsson decided to paint the last empty wall, despite the fact that he was not officially commissioned​​by​​the​​National​​Museum’s​​committee.

**** All sketches of the painting were rejected by the committee and criticised by the audience, which led to resignation of realizing the monumental decoration. The final oil sketch was eventually bought by a Japanese collector and, after more than 70 years of public debate, brought back to its original place and​​ hung ​​in ​​the ​​National ​​Museum’s ​​hall ​​in​ ​1997.

***** With a special case of Iceland; having regained independence in 1944, Icelanders had to ‘reconstruct’ their national identity. Located halfway from Europe to the USA, with great influences by American culture (American soldiers were stationed on the island from the 1950’s), Iceland was seeking for its Scandinavian/Vikings’ roots in both popular culture and architecture, yet the American impact ​​is ​​still ​​very​​ visible. 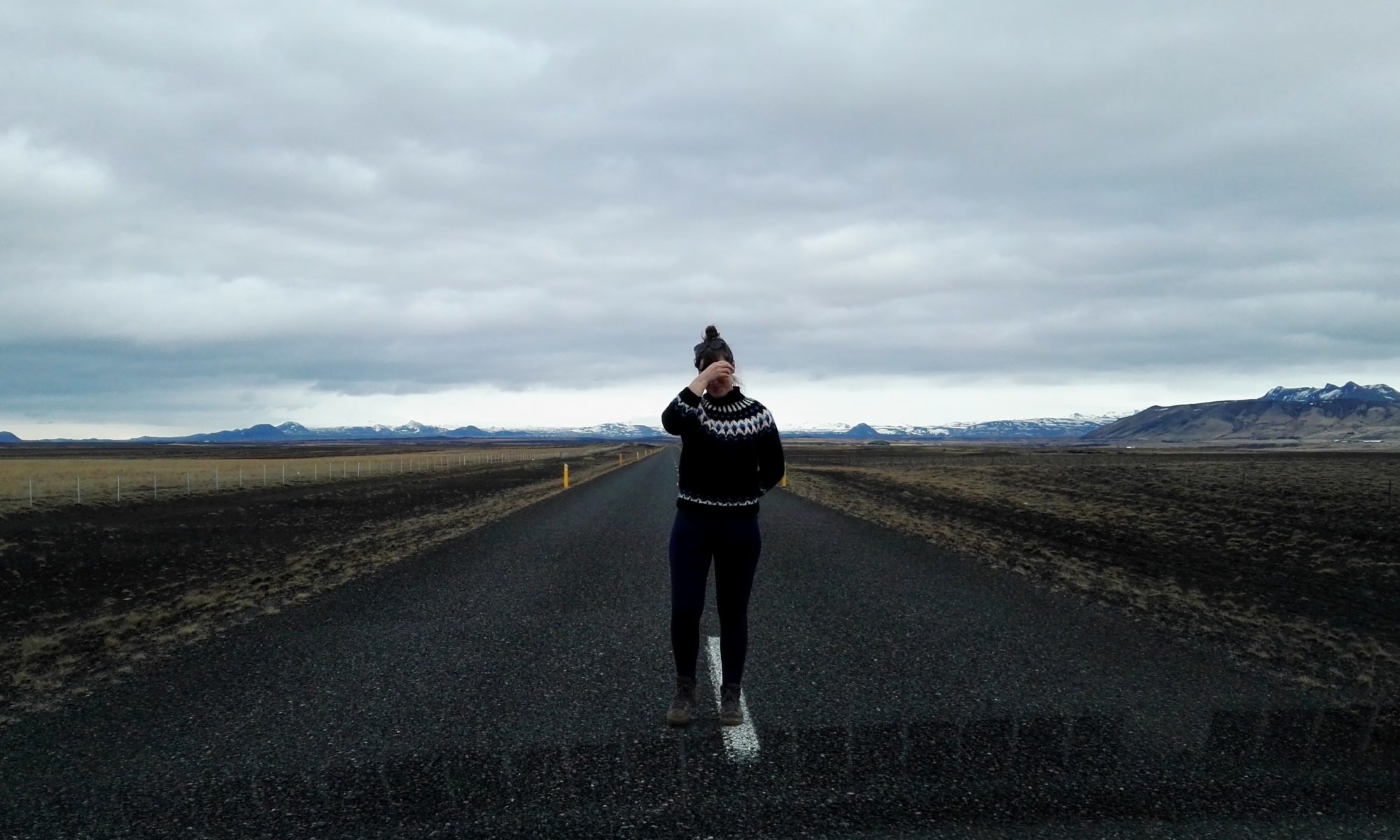 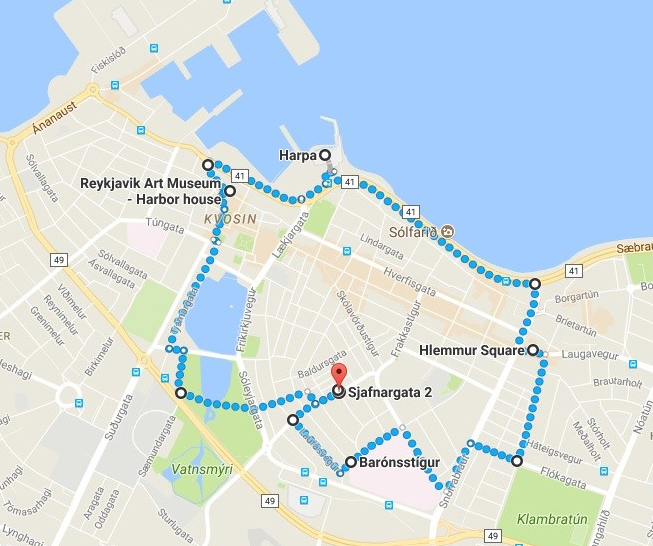 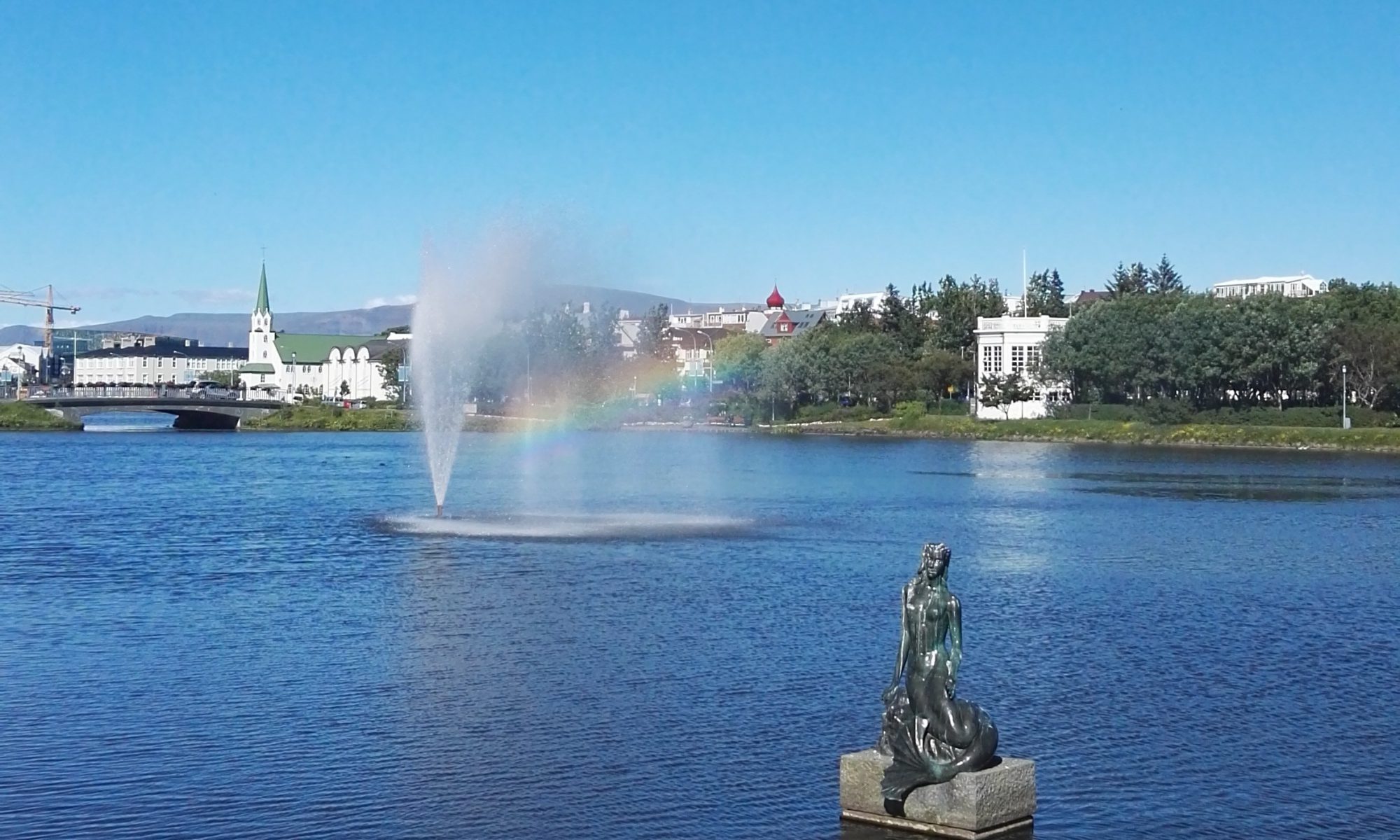 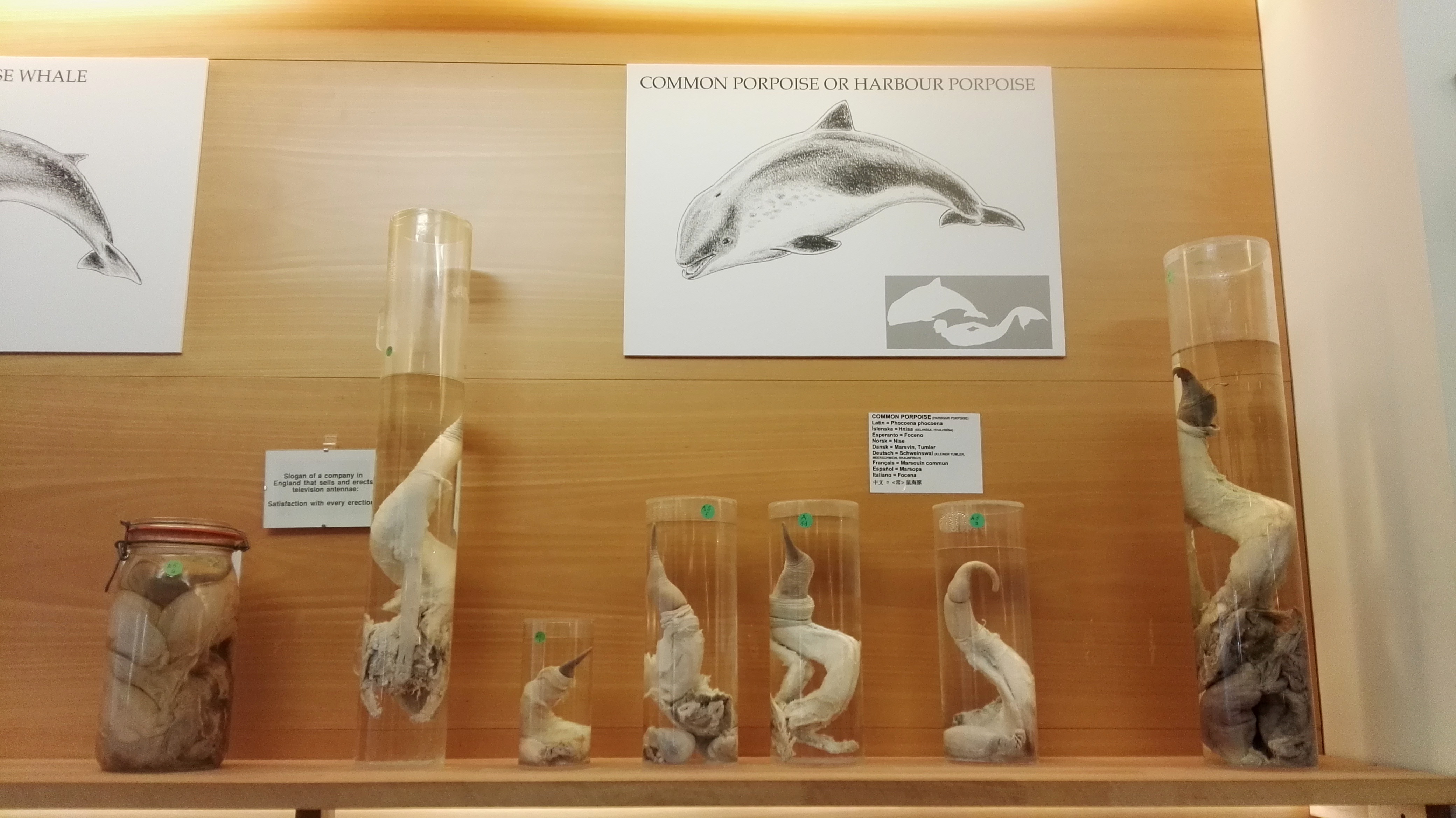